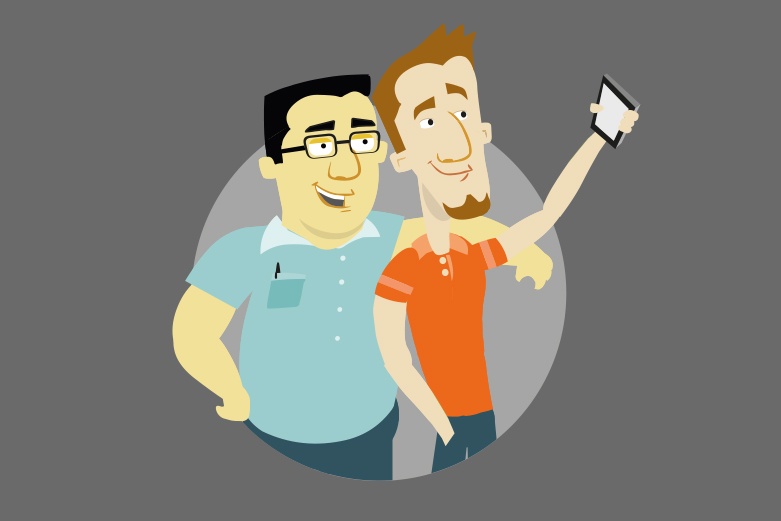 Behind the Scenes of Dan and Paul Campaign

Marketing is all about budget right? Well, at least that’s what everyone says.

So if that’s right, how can a small startup with (very) limited marketing budget compete with the giants out there, how do you “get above the white noise” if you will, of marketing campaigns, ads and messages?

With that thought in mind, and with a target of participating at RSA Conference 2015 at the end of April, we set off four months ago to plan, design and launch what we thought would be a unique yet budget- sensible campaign.

“So where do we start?” Good question, right? Well, we went to the source and back to basics and joined a 3-day seminar by one of the leading online and social marketing experts here in Israel, Limor Shiponi. Anyway, during the course of the seminar we got really cool ideas on how to plan an effective marketing campaign, while not losing our pants in the process.

On the one hand, we had to make it unique so that we get noticed, but on the other hand very effective so that we see results – namely, more followers to our social sites, more brand awareness, and if everything goes well, many visitors to our booth at RSA Conf.

We went through quite a few different ideas, and at the end decided to base the campaign on a new product launch we are planning to coincide with RSA Conf (surprising, huh?). You’re probably now thinking “what’s so imaginative there, everyone does that”…Well you’re right, but we took a different approach.

The solution we are launching is called Safe-T Secure Cloud Access Broker and it is designed to help resolve a new problem which is effecting the day-to-day work relationships between IT and the company’s employees. Specifically, we are looking to resolve the conflicting needs of employees wanting to use consumer cloud storage solutions (DropBox, Box, Google Drive, etc.), and the IT which is protective of the company’s confidential information which might be stored to these solutions.

It is important to understand that since we are talking about using cloud solutions and their effect on the work place, then this problem is not constant, it's constantly growing, becoming more varied, mixes business and private data, and is difficult to control.

Safe-T’s Secure Cloud Access Broke solution allows free access to any cloud storage from within the organization while adding full auditing, control, monitoring and management of the traffic. This way we make sure nothing is leaked out of the organization, and help resolve the conflict between IT and the employees in the process.

So if this is the product and where it plays, why not create a campaign which will showcase the new solution, while raising awareness to a much needed change in managing the issue of cloud access, in dialogue between departments, and educate about the problem and solution.

We finally created a campaign which revolves around the story of two guys (Dan the marketing guy and Paul the IT guy) and how they suffer day-to-day until Safe-T shows up? And this is exactly what we did, we started off by creating a 4 part (chapters) animated movie telling their story and endless battle.

We then created twitter accounts for each one of them, and tweeted like crazy to attract as many followers as possible. We started them well in advance of the clips being released, so by the time we leaked the 1st chapter, each one of them had over 300 followers (not bad for virtual guys), but no one new they have any relation.

We also created Dan and Paul giveaway’s for our booth at RSA (come visit us, we’re at booth #541), so that the campaign is also reflected during the conference and after it.

And, last but not least, we added a dedicated landing page to our website, relating to the campaign where people can get more information, check out the movies and contact us.

Once we leaked the 1st movie, people seeing it understood these two guys have some weird relationship going, and then the fun started – we initiated a “twitter dog fight” between them based on the relevant chapter’s story.

By now, people following Dan and Paul on twitter and watching the released movie chapters, know they are part of a Safe-T campaign, and that’s is the nice thing about it, it makes us different.

From looking at the numbers of followers on twitter, Facebook, LinkedIn, website hits, the campaign is really showing traction! We hope it will grow in the coming days and weeks, and plan on using Dan and Paul also in the future in order to become a forward looking vendor, help raise awareness and take part in a much needed discussion.